The Desolation of Smaug tickets! 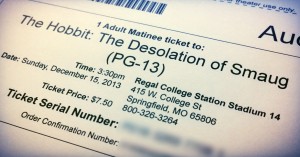 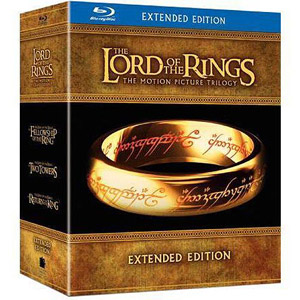 Today was a great day of food and watching 11 hours of  The Lord of the Rings.  One ring to rule them all.

I love finding movies that were shunned by critics and yet are actually good movies, at least by my standards. House of D was written and directed by David Duchovny, he also plays one of the parts in the movie as well. Also in the movie was Robin Williams, Tea Leoni, Erykah Badu and Anton Yelchin. Anton Yelchin did a great job as the lead character Tommy. He was also in Hearts In Atlantis with Anthony Hopkins a few years ago and I liked that movie as well.
This movie isn’t your big blockbuster action packed movie. It’s follows Tommy as a 13 year old back in 1973 and some of the experiences that changed his life. Robin Williams plays Tommy’s retarded friend and did a great job as he usually does. Tea Leoni also did well I thought as Tommy’s mom.
The critics gave this movie a C with comments like “…House of D, is like the kind of sticky greeting card you’d find on CBS some Sunday nights…” or “…goes from bad to unbearable…” I have to disagree with them and easily give this movie a B+.

Wow! Highly impressive. Peter Jackson shows his stuff and it was good. The first hour or so is a little slow, but Jack Black and Adrien Brody carry it well. The special effects are incredible. Naomi Watts did the best out of the actors in the movie in my opinion. I see so many movies and you just can tell when an actress or actor just doesn’t play the role and make it believable. Naomi was totally believable and did an awesome job. I wasn’t as impressed with the music as I was for Chronicles or Batman. But it was good. Kong did manage to knock Chronicles of Narnia from the top spot but it didn’t actually do as well over the first weekend as Chronicles did. Since I don’t think there are going to be any more really good movies for 2005 here’s my list of favorites for the year.
1. Chronicles of Narnia
2. Serenity
3. King Kong
4. Batman
5. War of the Worlds

The Chronicles of Narnia

Not sure how well Chronicles will do in the box office, but in my opinion it beats all of these movies. The acting wasn’t top notch, then again the majority of the acting was kids and they did do a good job. I did think James McAvoy, Mr. Tumnus the faun, did really well. The White Witch, Tilda Swinton, was very believable and well done. I also enjoyed Liam Neeson as the voice of Aslan. From what I remember of the book the movie seems to have followed the story line exceptionally well. There were a couple of scenes that looked too fake. The animation of the animals and mythological creatures was wonderful. The battle at the end was on the size of some of the battles in the Lord of the Rings (my all time favorite movie by the way).
I went into the theater with fairly low expectations, not sure what to expect. I left impressed and wanting to see it again.
I’m curious to see whether they make any of the other Chronicles stories into movies. It’s a little unlike The Lord of the Rings in that the other 6 books don’t feature the same characters. I think the White Witch is in one of them, if I remember correctly. One last point…it’s good to see a well done captivating movie with no cussing and sex.

Since I found Serenity….

I was in Chicago a few weeks back and I stayed at my brother’s while I was there. One morning while Brandon was snoozing away I looked through his DVD collection and found the Firefly TV series DVD. I had heard about the movie Serenity that was to be coming out and knew it was based on a short-lived series called Firefly. The trailer for Serenity looked good, but I wasn’t to sure. So while Brandon slept off our many hours of walking I popped it in and watched the pilot for the series. 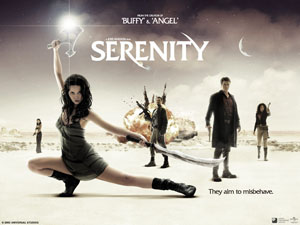 I was hooked. It was good. I wasn’t sure at first, it seemed like it was going to be another Fox goofy sci-fi no-need-to-watch TV show. My wife will confirm that I hate, hate, hate and again hate watching TV shows or movies on TV. I just can’t deal with what I’m watching being broken up by idiotic comercials for junk that I don’t care about. I watch almost no TV and what I do watch is from recordings made using Windows Media Center on a PC in my living room. So when those retarded comercials come on I can hit the fast forward or skip 30 seconds button! Whoo hoo.

Anyways, I proceeded to watch all 14 episodes during the two weeks before Serenity came out and I loved every one of them. There is some stuff they could have left out from a cleanliness (sex, language etc.) standpoint. But overall it’s awesome. Serenity the movie is no exception. Wow! Jaw dropping great effects, good acting, lots of humor and some surprises if you watched the series. My brother-in-law has never seen the series and he loved the show so it does appeal to people who haven’t seen the series. Go see it! ps. If you are curious about the title of the post watch the show and you’ll know what’s up.