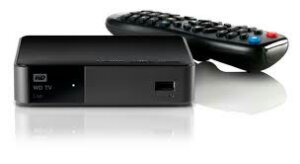 I’ve been curious about the Western Digital media players for some time.  Since I’ve had a Roku and a Roku 2 media player for a year or so I haven’t felt the need to investigate them further.  At the time I went with the Roku boxes the reviews of the WD players weren’t the greatest and they frankly didn’t look to great either. The reason I took another look at these was because I needed an inexpensive box to hook up to a couple of large TVs and be able to put some marketing videos onto and have them loop. The Roku supports playing videos from a USB thumb drive but I couldn’t get them to loop continuously. Also the Roku only supports a few video types (.mkv and .mp4). Local network streaming is non-existent on the Roku unless you use something like Play-On, which I didn’t want to mess with. After some research it looked like the WD player would do what I wanted through playlists and it’s support of more media types. It also had network streaming through standard Windows shares or through a media server like TVersity. The price of this model is the same as the upper model of the Roku boxes at $99. I ended up getting one from Amazon for $89 with free shipping. 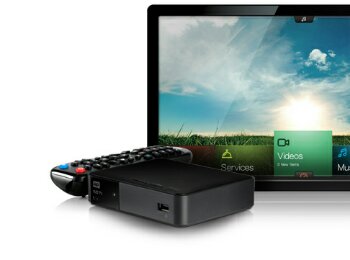 The reviews on the current WD Live TV were mixed and ranged from disappointing to merely OK. Some said the interface was dated and slow. Not one to be deterred from most reviews I ordered one. Right away I noticed the claims of a dated interface to be inaccurate. I was impressed with the interface actually and found it laid out nicely and appealing. I started messing with getting videos to play through playlists and quickly determined it wasn’t going to be user friendly enough to work that way. I messed with it for a bit and then went back to work on other things. A co-worker decided to play with it and found our solution. In the settings menu there’s a choice for looping none, one or all videos. Once that was set to all you can just open up the files menu, browse to the USB thumb drive where we had 4 or 5 videos, hit play and off it went. We left work that evening and let the videos play. When we came in the following morning they were still playing and the box hadn’t overheated or exploded, which was a plus.

The WD Live TV also has a services section where you can run things like Netflix, Hulu, Pandora, YouTube, Vudu and many more. The Roku is a bit better in this aspect because there are more services/channels availble on that platform and the Roku lets you pick and choose which channels show up on the unit. The WD has what it has and currently doesn’t have a way of getting more or removing those you don’t want. The YouTube services worked well but didn’t give you a way of viewing YouTube channels you are subscribed to. You can view favorites or playlists but that requires you to pick individual videos. You can search for a YouTube user and see their videos but they aren’t necessarily in order. Hopefully this is an area that will get some attention in a future update. The only service that I noticed was missing was services from Amazon such as their rentals or access to Amazon Prime streaming.

As far as the hardware is concerned the box itself is nice and small and solid. Not as small as the Roku 2 but easily something I would put next to my TV. The remote is a bit dated looking and cheapish feeling. There is an Android and iOS app that you can use on your respective device to control the media player and both seemed to work pretty well. The USB port supports plugging in a keyboard which is handy when doing searches. I’m going to try a wireless keyboard later and see if that works. The unit has built in wireless b, g and n support though I mainly used it with ethernet. There is another model of the Live TV called the WD Live TV Hub which is currently $90 more on Amazon and has a built in 1 TB hard drive and a media server as well as component video ports.

Overall the WD Live TV is a solid choice for a media player for your TV. It’s support for many different file formats and network streaming give it a hand up on the Roku in my book even if it doesn’t support as many other services as the Roku. Time will tell if WD continues to get updates and added features. Since Western Digital’s primary business is hard drives it’s easy to see that they could decide it’s not worth the effort especially since every TV sold in the coming year will likely have some sort of internet based services built in it might not be a lucrative enough business for them to continue.