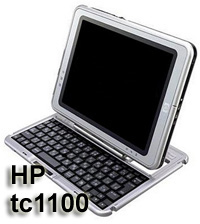 I love my job. At work we have a project coming up that is likely to work best with tablet PC’s. Once we get into this project we are going to need about 30 or more of them. So, to find out which brand and model will work best for our application we have got a couple of them in and have been experimenting.

The models we have played with so far are the IBM X41, Toshiba Tecra M4 and the HP tc1100. We previously had a Viewsonic V1100 and we had a rep from Motion Computing come out and show their line of tablets as well.

The Motion Computing tablets feel solid and are really sharp though we haven’t really got to test drive it. It’s hard to tell how they will perform without taking it and really putting it to use for a few weeks.

My favorite so far has been the HP. This actually came as a surprise to me because I’m not much of a HP guy. We have a HP 9000 Unix server that does a good job and we use almost nothing but HP printers. I’ve never really cared for their laptops or desktops.

The Toshiba is really more of a laptop and is way to big to be a useful tablet pc. The M4 is a convertible type where the screen rotates around and can lay flat to be used as a tablet or upright like a laptop. It’s performance was good although it was bogged down with a bunch of Toshiba junk which we promptly turned off most of it. The battery life seemed shorter than the other two probably because it had a larger sized screen.

The IBM is sharp from a hardware standpoint, but it’s performance was poor compared to the HP and Toshiba. It has built in fingerprint reader which is interesting but not really needed for our uses, plus the software running behind it seemed to be one of the biggest drains on performance. After turning off alot of the extra software and stuff running in the background it worked a lot better. The X41’s size is nice and it feels real sturdy. One gripe I had with it was the fan that keeps the cpu cool was unusually noisy. This could have just been a problem with the particular unit we had but it was annoying in quiet situations. Like the Toshiba it is a convertible type tablet PC.

Like I said before the HP has come out as my favorite so far. It’s size is great. The design is sharp and it’s performance was particularly surprising. I loaded Photoshop CS2 and had no problems editing large photos. Running Microsoft Office (Word and PowerPoint), Firefox and a couple of other applications simultaneously wasn’t a problem for this little machine either. Battery life seems good thus far as well.

The HP can be called a convertible or a standard tablet because the keyboard can be removed or acts as a stand. The keyboard is a undersized version and can take a little getting used to.
We’ll be testing some other models later and will keep you posted on those as well. Right now the winner is the HP.