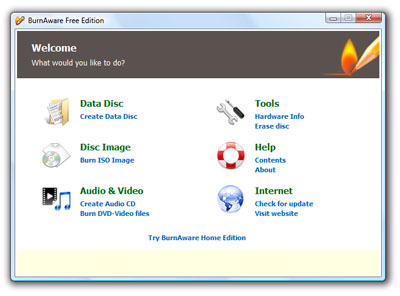 I’ve been a long time Nero user, but lately it seems even my favorite burning software has become so bloated and overfilled with extras that it’s a hassle to just install the beast.
So, when I reloaded my laptop recently I started poking around for an alternative and I found this little free gem called BurnAware Free.

The software is made by GloryLogic.Â  They also have a paid version that has more features like UDF data discs, bootable discs, writing files larger than 4 gig and more.Â  The free version does your typical audio discs, data disks, burn and create iso images and more.Â  Here is a list of differences in the versions.

I like to make my own bootable XP install cd’s and dvd’s so I’ll likely purchase the Home version but for now I’ve been using the Free version andÂ  love the less is more approach to the interface.Â  That’s me, less is more.Â  Keep it simple stupid.