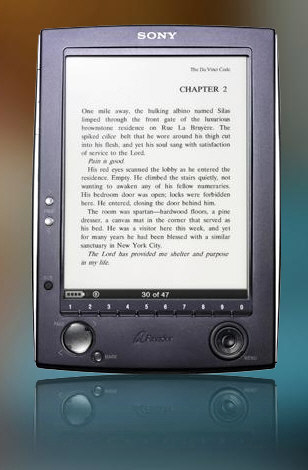 I’ve longed for a way to read books on an electronic device for along time. I’ve tried reading on Tablet PC’s, Pocket PC’s, Palm Pilots, Notebooks and standard PC’s and have never been able to read a book for an extended period of time. The Sony Reader has changed this. I’ve been able to sit and read a couple of different books for several hours at a time and could read longer if I could just stay awake!

The screen looks great and the brighter the room light the better the screen looks. The lack of back light is a downfall in low light situations, but leaving out the back light is one of the reasons the battery lasts as long as it does and this I’m sure helps keep the cost down as well. At 6 inches the size of the screen seems perfect to me. The interface is a bit slow, but then again, the prime use of the device is to read books so the speed isn’t a concern to me. It has somewhere around 92mb of built in memory. This doesn’t sound like a lot, but it actually turns out to be plenty. I’ve added a 2gb SD card as well, so I have more books on the thing, than I could read in a year and much space left over. Most of the books are going to be 2mb or less, mostly less. I’ve subscribed to some RSS feeds using the Sony software and many of those are 5mb or less.

The software for getting books on the device leaves a bit to be desired in my opinion. It’s not that straight forward and could use some improvements.

Sony’s website says the battery will last for 7500 page reads on one charge. I’ve read close to 200 pages of one book and 50 or so of another on one charge and the battery indicator hasn’t budged from showing full, so it looks like battery life will be a non issue. I don’t see myself sitting through 7500 pages in one sitting in this lifetime.

I haven’t tried the built in MP3 player, but I would think that would drop the battery life some at least. With my added 2 gig memory card, I have plenty of room to throw some good reading music on it. You can also put pictures on the device that look surprisingly good for being black and white or more like shades of grey.

One thing that Sony did do to offset the somewhat pricey device, was to give you a $50 credit to it’s online book store. With this $50 I bought three books and still have $15 left. The books I purchased are new books as well, so this was a nice addition. Buying books from within the software was a piece of cake as well. The price is a bit high at $349, but it does what it’s supposed to and does it well in my opinion.