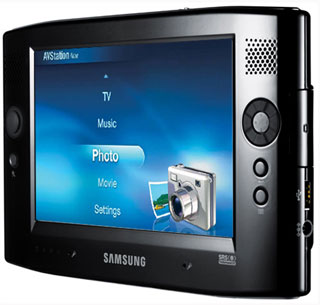 We’ve had the Samsung Q1 for about a week now. It’s certainly an impressive machine. The price on it is far better than some of the other attempts at making a handheld PC (not Pocket PC or Windows CE). We purchased the unit for about $1050. The OQO is priced at around $1900 to $2000 and Sony’s Micro PC (they apparently don’t like the UMPC name) will be $1799.

I said a couple of days ago that the unit reminds me of a large PSP as far as the look and feel of the hardware. It’s quite comfortable to hold in my hand even while watching movies (or several episodes of Lost as I did). The screen is very nice and bright. I wish the resolution was higher. The native 800×480 is just not enough screen room sometimes even for normal Windows dialog boxes. But those clever guys at Samsung did add a button that allows you to up the resolution to 800×600 or even 1024×768 though it actually just scales the viewing area to be those resolutions so they don’t look as good as the native resolution. You don’t want to run it in those other resolutions on a normal basis but it certainly was helpful for situations where dialog boxes would go off the screen.

One of my complaints about the OQO was heat and while it does get a bit warm, it’s nothing near the heat generated by the OQO handheld. And the heat is situated in an area where you don’t normally put your hands so it’s not something you notice much at all.

Another complaint about the OQO was it’s use of the pen, though they have gone to Tablet PC version of Windows XP on the OQO so I can only assume it’s better than it was. The pen works well on the Samsung and the touch screen works great too. I’ve tried many different tablet PC’s and the lack of touch screen has always been a gripe of mine. 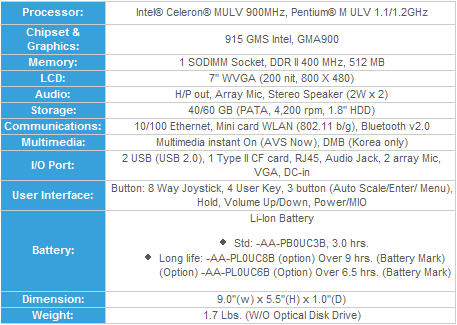 The system performed very well for being a Celeron processor. See the chart to the right for details on the specs.

I was excited about the screenshots I had seen with the circular on-screen keyboard. Typing on any sort of handheld whether it’s a Palm, Pocket PC, Tablet PC or UMPC has always been a pain in the neck. After using the on-screen keyboard I’m not as excited. I have to say that it is usable, it’s just not near as fast as I had hoped for. After typing on it for some time you can certainly get faster and it beats using a pen to punch on the standard on-screen keyboard that comes with Tablet PC’s.

So, after using the device I have to say it is a sharp machine with several uses. However, I have to wonder how many of these are really going to sell. It’s not a replacement for my laptop and it’s not a replacement for my Pocket PC. It does multimedia very well, but who’s going to buy it to watch movies? I think it would be a great purchase for someone who travels alot because you can watch movies, listen to music, play games and get on the internet using the wi-fi.

But even in that situation the battery life isn’t the greatest. I think the longest I got out of it was about 2 hours. You can get a Sony PSP for a quarter of the price with a better battery life and do all of those things, though with a smaller screen.

I guess if you’ve got the money then go for it, it’s a great machine.