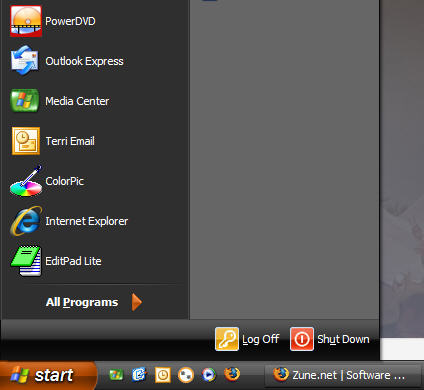 While poking around the Zune.net website I found that Microsoft has released a new desktop theme called Zune. I like it, it’s got an orange start button and makes the taskbar and windows black. Speaking of Zune, I picked one up and have been using it for about a week now and I dig it! I like it better then the iPod, plus I don’t have to use the evil iTunes! :) I’m going to write up a more indepth review later, but for now I really like Microsoft’s first attempt at a MP3/Video player. You can get the desktop theme from the Microsoft Zune site or from my site here.

FYI…you might see some wierdness going on here at my blog because I’m in the process of rolling my other site up into this one. I also write over at MISGuys.com, that site is for computers and tech related stuff, but I’m finding it too much work to maintain two sites plus my photoblog, so I’ll be moving the content from there over here.