Vehicles that are paid for and continue to work are nice. My 1997 Chevrolet truck has 225,000 miles on it.  The air doesn’t work, the driver side door wasn’t working from the inside and the tires on the front were as close to bald as you can get without being illegal.  I had been thinking of getting rid of it and getting something newer. The thought of another car payment is not a pleasant idea. So, I figured I’d give my truck dome attention and curb my desire to replace it.

$200 for tires is not fun, but they look and feel much better.  I rigged a handle in the door so I don’t have to roll down the window to get out.  To help with no air conditioner I tinted the windows, which turned out much better than I expected.  Then I replaced the old stereo, which wasn’t picking up radio anymore and sported a cassette player.  I had been using using a static laden cassette adapter to listen to music through. 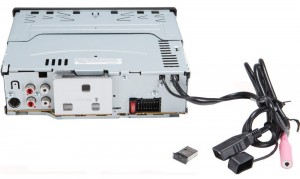 I went with a JVC KD-X50BT it has Bluetooth, USB ports and an aux input.  It also has FM radio that works which is a plus, I guess.   The Bluetooth works well for streaming and or hands free calling through my Samsung Focus S Windows Phone.  It comes with a microphone with a long wire that can be mounted close to the driver for talking.  The aux input works as expected as does the USB port using a thumb drive. There are 2 USB ports but one will be taken up by the Bluetooth adapter. It also supports iPhone and iPod control through the USB port but i didn’t try it.

You can change the color of the buttons and display to about 25 different colors, which is cool.

Installation was super easy.  I picked up a Scosche radio install kit for about $10 on Amazon and a Scosche wiring adapter from Walmart for $8.  In about 2 hours I had the old radio out, the wire adapters connected together, the Scosche kit in, the radio slid in and some tunes pumping out.

One word of warning, it does not have a CD player so you can get rid of those burned CDs. I was just fine since I don’t use them anymore.  I think it’s probably been 2 or 3 years since my last purchased CD in favor of the Zune marketplace or Amazon.com downloads.

Overall I am very pleased with the stereo unit and just hope my truck keeps running now that I invested a bit of money in it.