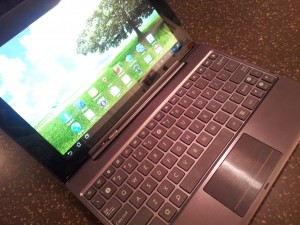 I’ve been an iPad user from the beginning. I had used an iPhone for awhile before the iPad came out and quickly realized that iOS would be great on a tablet. I pre-ordered the iPad and have been using one ever since. It’s the form factor that I’ve wanted for years. I had tried multiple Windows based tablets but they never performed very well. They had either bad battery life or bad hardware design coupled with the fact that full blown Windows (current versions and back) is not a viable tablet OS. Windows 8 looks to change that trend but that’s still to be seen.

I’ve tried Android a few times. I wanted to like it but never did. Especially not on a phone. The tablets up to this point were disappointments when compared to the iPad. The first Asus Transformer was a great piece of hardware but I still did not feel Android was well suited for a tablet. Don’t get me wrong, it worked as a tablet. I could read books, listen to music and surf the web. The experience paled in comparison to the iPad though.

I got my hands on the new Asus Transformer Prime and after a rocky start I am beginning to see a competitor to the iPad experience. My problems started right from the start. When you turn on the tablet for the first time you get the welcome and initial setup screens. On the third or so screen I began experiencing crashes of DMClient (still not sure what it is). I did a few factory resets with no luck in getting it to run stable. I also was having Wifi issues. Some sites wouldn’t let me login, some apps wouldn’t work at all and overall just weirdness.

I tried to get it to update but that caused more crashes. After downloading the latest firmware (prior to 4.0’s release) and several reboots it was updated but still crashed and had spotty Wifi. That same night Asus released 4.0 (Ice Cream Sandwich) 2 or 3 days early. I couldn’t get it to update and went to bed frustrated and decided to return it the next day. The next morning I figured I’d give it one more try. I found some instructions that had me go to the applications app, delete data from the DMClient service, force it to stop and then rebooted. On reboot I was able to check for an update and got it installed. Right from the first boot of 4.0 I could tell it was doing better and the device has run perfect ever since. 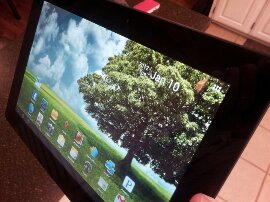 Hardware:
The hardware of the Transformer Prime is nice. Just like it’s previous version it’s well made and solid. Every time I pick it up I’m reminded of how cool it is. The dimensions of this version are better in my opinion. I found the original Transformer to be awkward to hold. I also purchased the keyboard dock and have to say that it is awesome. I’ve used a keyboard a few times with the iPad and it was never really of much use to me. This keyboard dock is very well integrated with the tablet and it adds to the tablet in many ways (typing, battery life, touch pad, SD card slot and USB port). I can’t speak to the cameras (front and rear) because I haven’t used them nor will I most likely. I never used it on the iPad (not just because they weren’t very good). I can see using them for something like Skype but I just don’t currently have the need. This tablet is almost identical in thickness between it and the iPad 2, but it seems to weigh less. I tend to be sensitive to heat. I can’t take laptops where the wrist rest area gets hot on one side or the other. I’m happy to say the Transformer Prime hasn’t had any heat issues. I haven’t had time to watch a movie on it or play an intense game on it for a period of time to see if it warms up any.

Android 4.0:
Apples’s iPad and iOS has been the king of the tablet market for two years now. I’ve tried to like Android for awhile but never felt it met the experience of the iPad. I still prefer Windows Phone on my smartphone but Android 4.0 has reached a level that I can feel confident in using on a regular basis. The updates to 4.0 are mostly small things but they add up to a much more pleasurable user experience. The first thing I noticed was the font used through out the system it’s a fantastic standardization that Microsoft learned to do with it’s Metro UI. The other updates are welcome polishes as well such as the updated settings area. I’m still confused by the quality of the built in web browser though. Web browsing is one of the key uses for a tablet and the stock browser is not very good. Luckily there are many other browsers to choose from in the marketplace and I particularly like the Dolphin browser. The gesture functionality of Dolphin is really cool. One aspect to Android still puzzles me and that’s the multi-tasking. I’m still not sure what exactly is left running in the background and what isn’t. It seems like there is a performance hit after using Android for several hours and I feel the need to go use a task killer application to make sure other apps are shut down. I need to spend some more time in understanding and controlling the background services and apps. The lack of polish and maturity of the apps for Android was another reason I avoided it. They always seemed like they didn’t get nearly as much attention as their iOS counterparts. Apps like Dropbox, Facebook, WordPress, Kindle, Amazon and others are at a much higher quality and offer the same or better experience than on iOS. 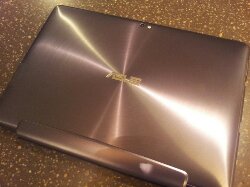 Keyboard dock:
I’ve used a keyboard dock with the iPad and it seemed like all it did was give me a physical keyboard. It was and afterthought. This keyboard dock adds much to the functionality of the device. It give extra battery life, a USB port (so far all I’ve connected is a mouse, both wired and wireless), an SD Card slot and a touchpad. The mouse/touchpad was a surprising touch that works much better than I expected. When you use the touchpad or a mouse you get an actual mouse cursor which makes certain functions much easier. When the tablet is docked into the keyboard and it’s shut it looks and feels like a very thin high quality netbook but functions much better than any netbook I’ve ever used. The other thing the keyboard dock has done is made me realize that I need touchscreen capabilities on my Windows laptop..now. I never thought I’d want to reach up and touch the screen on my laptop but I do it a lot on this and love the added input capability. I’m sure it will be commonplace in a few years after Windows 8 comes out and I can’t wait.

Conclusion:
Like I said I had a bit of a rocky start to the Transformer Prime. It was a frustrating experience and I can see several people returning the device before getting to a stable point of usability. I’ve been an avid iPad user since the first one launched. This version of Android brings me to a place where I am comfortable suggesting it as a viable tablet OS. The Kindle Fire is a great Android device meant for a different crowd then the Transformer Prime. The hardware has been good on the Android tablets for awhile. The first Transformer was a solid device. The Samsung Galaxy tabs are nice machines as well. The combination of the the Tegra 3 processor and Android 4.0 make this a very nice experience. In the past I’ve made an attempt to honestly use the other tablets and became frustrated very fast. The Transformer Prime is a fantastic tablet especially when you combine the keyboard dock. Although the price of the two together might turn away many people. Besides, I’m seriously attracted to the device because of the name. Even if they are getting sued for using it. The only other negative thing I’d mention is even between the time that I placed the order to when I received the Transformer Prime, Asus announced the next generation of Transformer Prime. So, of course, I already have a tablet that will be obsolete in a short period. The next generation is said to have a full 1080p resolution screen, a better Wifi antenna and a few other features. That’s the nature of technology these days though.

Updates:
1/12/2012 – I picked up the Transformer Prime today and felt something drop from my hand. Turns out it was my microSD card that I had in the slot on the side of the Transformer. The card sticks out just enough that it’s fairly easy to accidentally make it pop out of the slot. Luckily I felt it hit my had before it dropped to the floor. Since it’s a 64gb microSD card I’d have been quite disappointed to lose it.

1/20/2012 – I’ve used the Transformer Prime for the past week and a half and have to say I’m loving it. Like I said in the post, I’ve been a die hard iPad user since they came out and I haven’t missed the iPad the whole time. I’ve read books (or more accurately one long book), surfed much of the internets, watched movies, written blog posts and more. The HDMI out works really well. It requires a micro HDMI to standard HDMI cable which I found cheap on Amazon.com. I’ve since found out there is HDMI (like on your TV), micro HDMI and mini HDMI. Loading up books, videos and music using the microSD card is awesome. That’s definitely one feature that the iPad cannot do. My gripes so far? The USB charging is annoying. You have to use the USB wall charger that came with the tablet and not just any USB wall charger. I’ve plugged in the USB cable to multiple (I have many of the things from various devices) USB wall chargers and none work to charge the device. That’s just silly. The GPS is flakey. This is acknowledged by Asus and is one of the primary reasons (from what I’ve read) that they are releasing a new version of the Transformer Prime in June or July. The aluminum body is causing it to not work very well (again from what I’ve read, I’m no GPS expert). Currently my device says I’m in Branson, MO which is a town about 45 minutes from where I’m sitting right now. Asus released a new firmware update yesterday that was supposed to help the GPS but it seems no different to me so far. I just turn off the GPS and location services, I’m not going to use it in my car for navigating. I have a dedicated GPS device for that anyways as well as my phone. Overall I’m liking the device a lot.