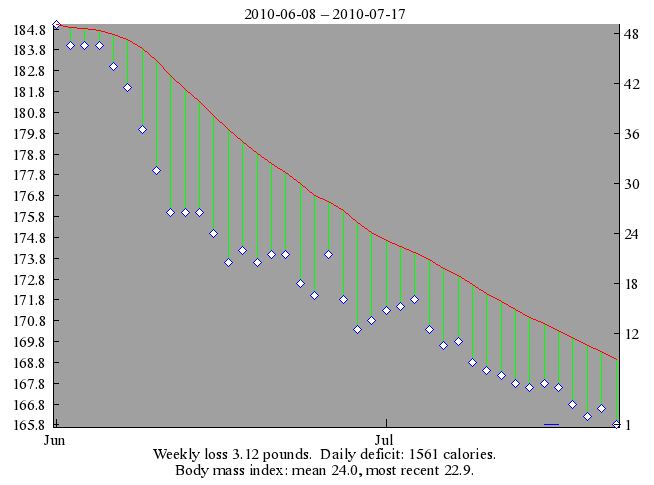 This is a chart of my weight loss that I started June 8th.
This coming Tuesday the 20th will mark 6 weeks and a drop of 20 pounds.
The small blue and white diamonds are the actual weight readings.  The red line is the trend line.

I haven’t done any exercise, I took information from The Hacker’s Diet and kinda took an extreme approach to eating less calories than I burn.
I am going to start doing the exercise program laid out in the Hacker’s Diet which is actually meant for getting fit not losing weight.

The first thing I did was cut out all soda, period.  No diet soda or anything.  I have only drank water with the Crystal Light flavoring packets (they are only 5 calories).
When I did eat I  just ate in small quantities and avoided obviously high calorie things like Krispy Kreme doughnuts and boxes and boxes of candy like I normally would eat.
For the first 2 or 3 weeks my daily calorie intake was roughly 600 calories.
Now, don’t start saying “that’s not healthy, you are starving yourself….” I’ve heard it all and ignored it all.
I was keenly aware of what my body was telling me and was watching out for adverse affects.I’m no doctor but the only adverse affect I noticed was constant hunger all day long, which is kinda annoying but livable.
Over the past 2 to 3 weeks I’ve slowing increased my calories to a whopping 900 to 1000.
Beginning later next week I’ll be slowly increasing up to roughly 2000 or whatever works best to maintain my weight.

Not everyone can do an extreme diet like this but it certainly worked for me, now for the hard part of maintaining this weight.