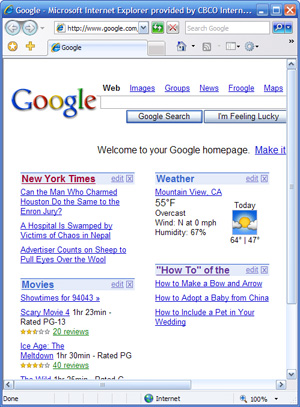 I’ve been running Internet Explorer beta 2 version 7.0.5335.5 for about a week now. The beta for IE7 has been out for a month or so now and I decided to give it a try using only IE instead of my normal favorite Firefox.

I have to say that I was highly impressed. IE7 is a big jump forward for Internet Explorer and Microsoft has done a good job with this version. Of course they have lots to glean from Firefox and even Opera, but this version in my opinion sends them in the right direction. I don’t really think any of the new features are new from a browser point of view. They finally added tabs which is a must for any browser. The reworked interface was done very well and though it took a little getting used to overall I liked it.
I’m not sure what other features are planned for the final release but one thing this is missing is the ability to skin or theme the browser. We are all individuals and we don’t like being like everyone else. That’s why I change my desktop wallpaper 2 or 3 times a week I guess. From a couple of things I’ve read there might be two different versions of IE7 one that comes with Windows Vista and a version that will run on other operating systems like XP. My guess is that the Vista version will have more features to entice us to move up to Vista. 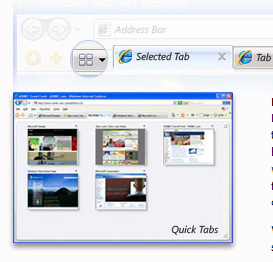 There was one feature that I liked that Firefox doesn’t have and I don’t know if Opera does or not but that was the Quick tabs view. When you have multiple tabs open you can a click a button and have an overview of the pages you have on each of the tabs. This feature isn’t earth shattering, but it seems like it could be pretty useful.

I did run into several problems with websites like Yahoo! movies page not wanting to show a trailer because it thought I didn’t have Windows Media Player installed even though I actually do. There were a couple of other instances of wierdness with websites, I’m guessing this is becuase of being a beta version as well as websites that might need some tweaking to recognize the new version.

So after using IE7 for a week is this new version good enough to draw me back away from Firefox? Sorry, not yet. The bugs I can live with, it is a beta version after all. I’d say as far as speed IE7 and Firefox seemed to handle about the same. I think for me the difference comes with Firefox’s ability to be theme’d as well as Firefox’s extensions. The ability to add on user created enhancements is huge and Microsoft needs to add this ability.